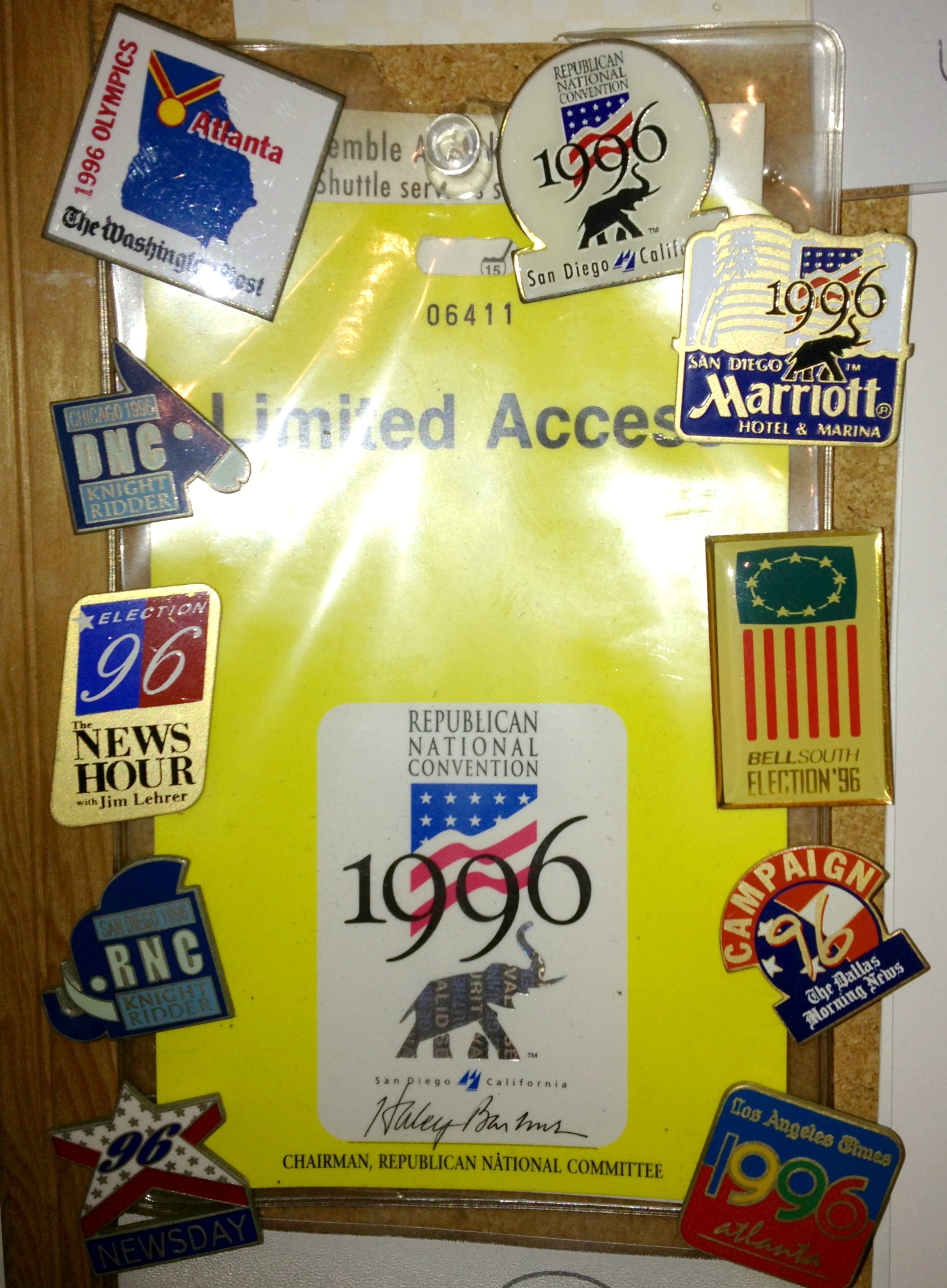 The RNC and Me

It’s political convention time, ladies and gentlemen! The “magical” events that occur every four years just weeks after the Olympics end. Over the years, I’ve had a hard time bringing myself to watch the convention speeches – too much rhetoric from both parties. Quite honestly, the conventions haven’t been the same for me since I watched the Clinton and Gore families dance on stage to Fleetwood Mac’s “Don’t Stop Thinking About Tomorrow” at the 1992 Democratic National Convention.

But despite the hope for the future I felt watching the DNC in 1992, I do have fond memories of the 1996 Republican National Convention (RNC). Why the Republicans and why 1996? Because that was the year the Convention took place in my hometown of San Diego, and I was so excited to be a convention runner for Knight-Ridder news service.

In the spring of 1996, a representative from Knight-Ridder, a newspaper publishing company that published 32 daily papers at the time, entered my college journalism class asking for students to apply to work as runners for Knight-Ridder reporters during the summer’s Republican Convention in San Diego. As a starry-eyed journalism and political science major at the time, I immediately completed the form and turned it in. A few weeks later, I was hired and I couldn’t wait for August where I would participate in a small piece of American history.

When the convention came into town, it was pretty much certain all the Knight-Ridder runners would be assigned to the Marriott suite newsroom and running errands. The runners were divided into three shifts: 8 am – 4 pm; 4 pm – 12 midnight; and 12 am – 8 am. Nobody wanted the overnight shift. But we all took turns as it was our important job to monitor the overnight wires for breaking news and assure the equipment stayed safe. Us runners mostly ended up sleeping on the Marriott floor.

During my first shift, I was given “the badge.” Every staffer at the RNC received a convention badge to wear around the neck. What I quickly discovered is that the badge is meant to also carry the special pins each news organization printed for the Convention. The goal was to get as many pins as possible. Staffers with many pins were highly respected. I still have my badge and all its pins. It’s one of my most prized possessions.

After I proudly displayed my badge, I was given a tour of the Convention Center floor. It was there that I become tongue-tied and more starry-eyed than I was before. You would think I had just met the love of my life. Instead my jaw dropped as I starred up at all the media booths — NBC, CNN, CBS, ABC, PBS, NPR — and there weren’t even any reporters in the boxes. I was in heaven; or perhaps what heaven is for a political pundit. That was the first – and only – time I set foot on the Convention floor.

But my real RNC “claim to fame” came when I was assigned the very important task of  bringing one of the Knight-Ridder reports more camera film. The task itself was nothing special, but where the photographer was located was. He was joined with dozens of other photographers and reporters at the Convention Center pier watching a boat come into the harbor. And on that boat was the Republican presidential nominee, Senator Bob Dole. He was smiling and waving, making his official entrance into San Diego by boat. I didn’t get to personally meet Senator Dole, but I was able to see him up close and personal. I felt like Woodward and Bernstein.

When the world-wind of the Convention ended, I went back to my normal life as a college senior hoping a political convention would again be in my future. I cherish the memories of summer 1996 along with my RNC badge, that today hangs proudly above my desk.