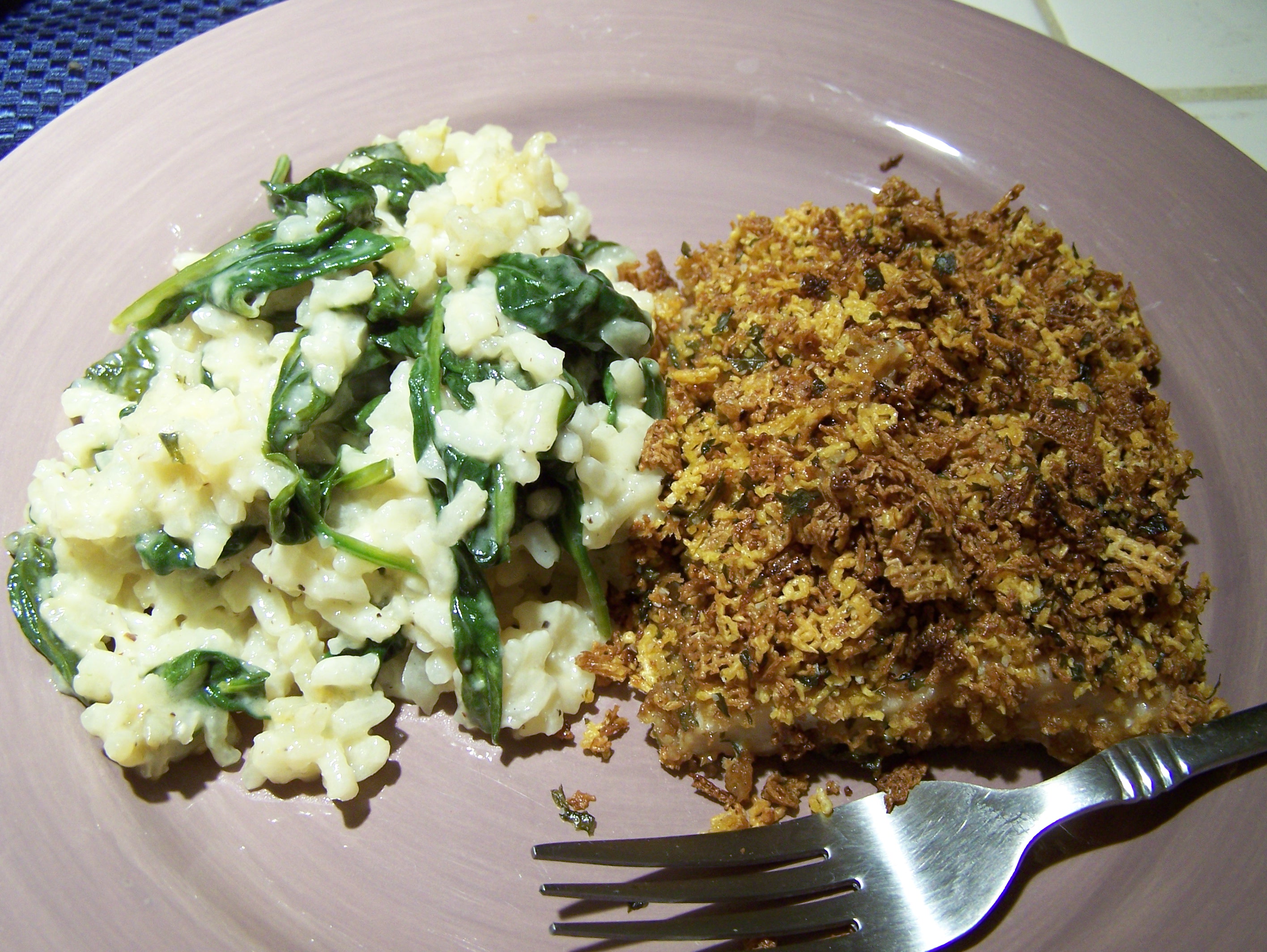 This Weekend in Cooking

This past weekend was the last weekend of the month. That means that we’re pretty much scraping the barrel waiting for pay day (four days away!), so no grocery shopping. This also means it’s the end-of-the-month cooking round-up. I actually quite enjoy this cooking experience. It involves making several recipes in an attempt to use up the remaining food in the house before ot goes bad and before next weekend’s major grocery trip.

So in honor of round-up weekend, here are the recipes I whipped up for the family to enjoy.

Crispy Crusted Lemon Mahi Mahi – This recipe is an adaptation of a Crisp Lemon Baked Cod recipe from Martha Stewart Living magazine. It’s very simple. You crush about 2 cups of Chex cereal. The recipe called for rice Chex. But all I had left was about a half cup of corn cereal and wheat Chex. So I used both of those and it turned out just fine. Add to the crushed cereal: ¼ cup olive oil (or melted butter), 2 tsp. lemon zest, about 1 tsp. dried parsley, and a pinch of salt.

Coat the fish filets with the crispy mixture and place them in a baking dish. Bake at 400-degrees for about 15 minutes. Martha’s recipe calls for cod. But since this was a “use what’s in the house weekend,” I used mahi mahi since, well, that’s what was in the house. Fish turned out quite tasty, and I think I’ll be making this again since I still have wheat Chex left in the pantry.

Spinach Risotto – I love risotto! I love this creamy rice concoction so much that it’s become a go-to side dish in this house. I use Rachael Ray’s Best Basic Risotto as the base. See below for the recipe since it was nowhere to be found online (it’s from Rachael Ray’s 30-Minute Meals 2 cookbook). I had a bag of organic baby spinach that was nearing its prime. So I threw it into this risotto and – presto – I had a vegetable to go with my starch.

Grandma’s Apple Cake – I won’t say too much about this family dessert since it’s the subject of an upcoming blog post. But needless to say, it’s a simple dessert and a great way to use up apples. The other ingredients are pantry staples.

Banana Bread – I love to make banana bread when I have a few VERY ripe bananas that just don’t look appealing anymore. Ironically those make the best banana breads. I always use the Better Homes and Gardens Banana Bread recipe. If I have more than a few left, I double the recipe and freeze the extra loaves. Sophie loves this bread too.

Green Goddess Salad Dressing – I try to make my own salad dressing when I can. It just seems healthier to me. Because I had four heads of organic romaine lettuce in the fridge that needed to be rinsed and cut, I decided on an adaptation of Barefoot Contessa’s Green Goddess Dressing. This time around, I did not have any basil, but I had fresh parsley. So that’s the base. It also allowed me to use up the leftover sour cream. Oh, and I omit the anchovies … that’s just me.

Buffalo Chicken Macaroni and Cheese – Sunday dinner was this very unique and tasty new recipe from Food Network Magazine. If you like Buffalo Chicken, you will LOVE this recipe. It was so good! I made a few changes: I used 1% milk rather than half-and-half. I also used less hot sauce than what the recipe calls for. And I cut the recipe in half because I only had a half-pound of pasta left. It made plenty for Bryan and I to eat and for leftovers the next day. This is comfort food at its best. SO GOOD!

Chocolate Chip Pancakes – This wasn’t to use up anything in the house. It’s a tradition for us to have pancakes Sunday morning. The recipe is quite easy – Bisquick pancake recipe with added chocolate chips.

So there you have it – this round-up weekend’s recipes. Enjoy!

In a deep skillet, melt the butter and olive oil. Add the chopped onion and cook until it softens. Add the rice and cook for 1 – 2 minutes. On low to medium heat, add the white wine. Cook until the wine cooks away, about 2 minutes. Add broth a few ladles at a time. Stir as much as you can. Once the rice absorbs the majority of the broth, add more to the mixture. Keep stirring. It will take about 20 minutes to use the broth and get the risotto to the desired consistency. When it’s done, add salt and pepper to season, as well as cheese. This is also when I add vegetables, such as spinach.