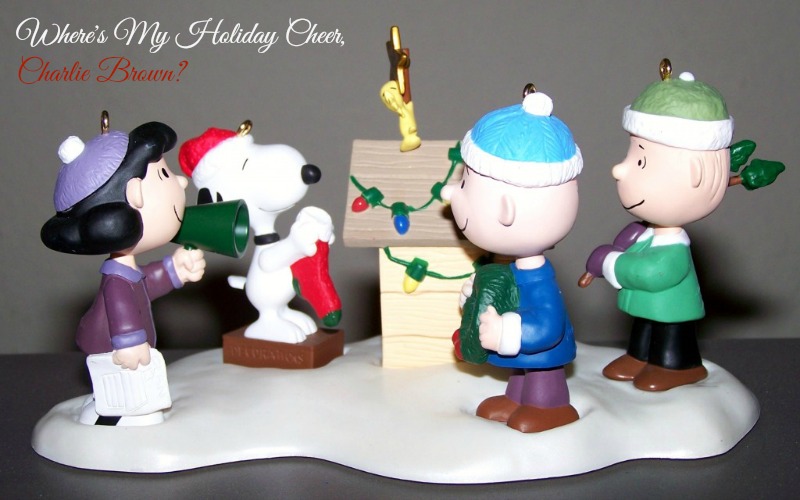 What Happened to My Holiday Cheer?

It’s December and the holiday season is in full force. This is a time of year I typically love — decking my halls for Hanukkah and Christmas, sending greeting cards, and preparing my holiday baking list. But this year, the holiday spirit seems to be lost on me.

When I say I’m not in the spirit, it’s not as if I’m likening myself to The Grinch. I’m more on par with Charlie Brown, feeling as if something is “missing.” After mulling this over for a while, I think I figured out what exactly is bothering me.

This year more than ever before, I’m finding myself more shocked by the constant commercialization of the holiday season and the huge emphasis on buying THINGS and spending money.

Let’s start with Hanukkah, a holiday that I’ve never really associated with being commercialized. Our family celebrations have included crafting, cooking latkes, lighting the menorah, celebrating with family, and one or two gifts. Yep, you read right — we don’t do the eight gifts on eight nights in this house.

This year the first day of Hanukkah fell on Thanksgiving. And because of that, it was as if manufacturers and consumers took this as an opportunity to commercialize the heck out of the holiday. Suddenly it was Thanksgivingukkuah and Jews were expected to celebrate the two holidays together with turkey menorahs, crazy t-shirts and other such paraphernalia.

While it’s true that the two holidays overlapped this year, I certainly don’t think it warranted a new line of decor and accessories. But there it was – a bunch of stuff for people to spend money on, and in this case, never use again.

Then there was the matter of all those stores opening on Thanksgiving. Bad enough people are nearly killing each other for Black Friday deals after just the day before giving thanks for what they have.

I think what disturbs me more and more each year is the emphasis on buying STUFF that we don’t really need. Deals disguised as bargains just to get people into stores to spend money and go further into debt. And it doesn’t end there! Small Business Saturday, Cyber Monday … all marketing ploys to get people to spend money!

Before I end, let me clarify that I’m not against giving thoughtful gifts or kids finding something magical from Santa Claus under the tree. What bothers me is not the gifts themselves; it’s the commercialization and focus on spend, spend, spend on “deals and bargains.”

I don’t know why this commercialization and spending craze is bothering me more this year, or why it’s put me into a holiday funk. Perhaps because every dollar I make (or don’t make) impacts our budget. Maybe because I have a daughter for whom I’m responsible for teaching to be a good person and steward of money. Or maybe it was the Thanksgiving-Hanukkah mash-up that set me off.

I do know that for me, the holiday season is not about buying things at discount and accumulating more stuff. It’s about the beauty, the magic, and – most importantly – the faith surrounding these days. It’s just sad that so much of the world doesn’t see it that way.