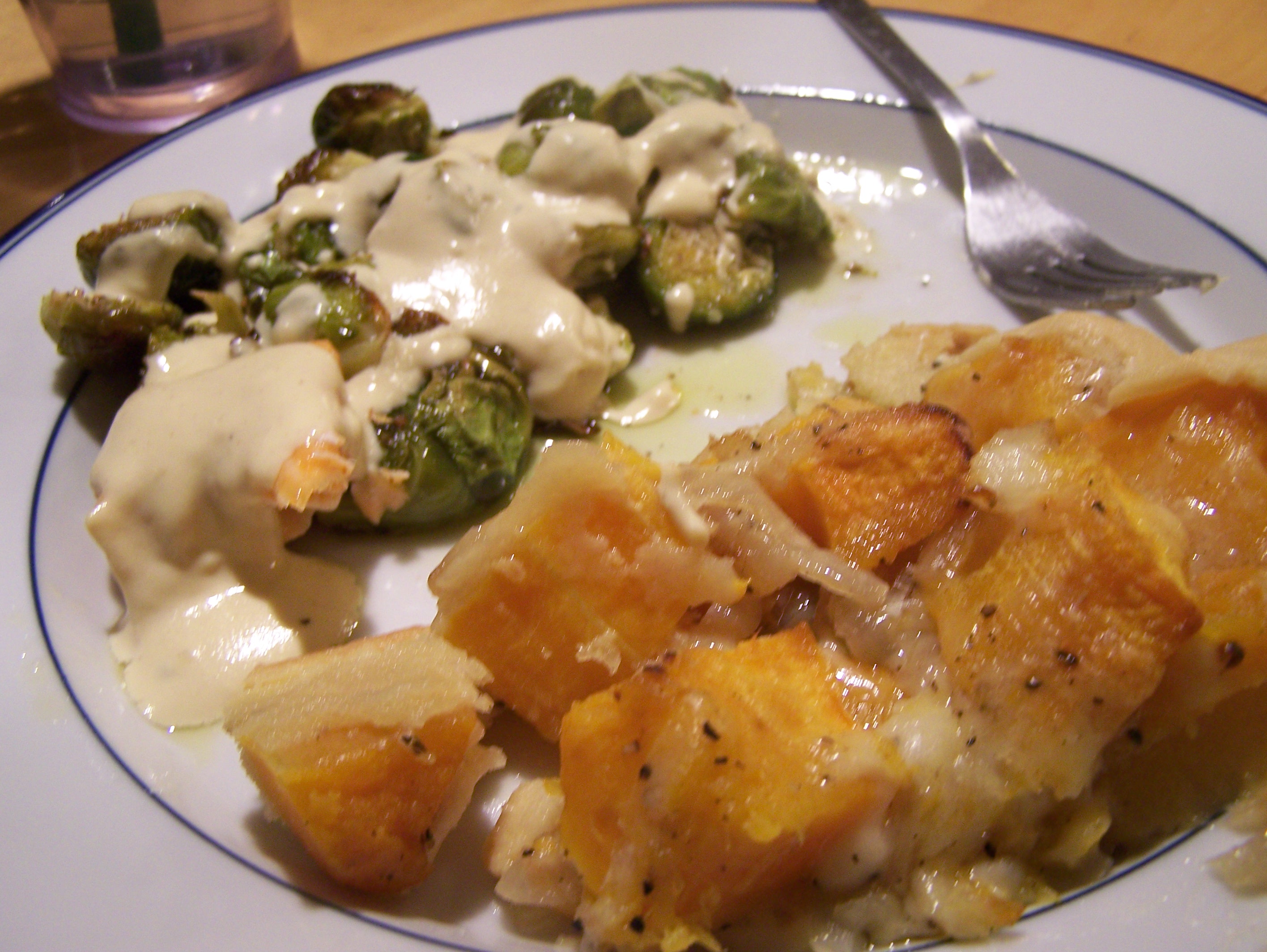 Who Needs Turkey with These Thanksgiving Sides?

We’re approaching one of my favorite holidays — Thanksgiving! Really, what’s better than a holiday devoted to food and eating? No gifts, no guilt, just delicious food and family.

Each year I always make the same traditional side dishes, many of which I’ll still be making again this year. But I wanted to try out some new Thanksgiving side dish recipes, especially since I had some great new cookbooks and magazines to pull inspiration. So I’ve tested three side dishes already and would love to share with you the results.

First up, Butternut Squash and Caramelized Onion Gillette from Smitten Kitchen. Despite it looking complicated, it was a fairly easy dish to prepare. Especially if you used a pre-prepared Trader Joe’s pie crust, which I did. Sure, you can make the dough from scratch. But I was looking for a few shortcuts and I had the dough in my freezer already.

But really, you just roast the squash, caramelize the onion, roll the dough, and grate the cheese. And PERFECTION! The assembled and unbaked gillette … The second side dish was a new take on roasted Brussels Sprouts. I love the ease of roasted brussels sprouts — just coat them in olive oil, sprinkle salt and pepper, and put them in the onion to crisp up. But then I found a recipe in my Taste of Home Best Holiday Recipes magazine for Garlic Roasted Brussels Sprouts with Mustard Sauce. This was INCREDIBLE! And this mustard sauce is my new “go to” sauce of choice. I can’t believe I had not discovered the brilliance of mustard cream sauce before this dish. Honestly, I could have made a meal out of just these two dishes (I did actually) …

Finally, I wanted to try a new stuffing recipe (although I still love my crockpot stuffing idea). I could not resist trying the Leek and Mushroom Bread Pudding stuffing in the new Barefoot Contessa Foolproof cookbook. I’ve always thought leeks were such an under-valued onion. They are incredibly flavorful. And, well ladies and gentlemen, this recipe is a keeper and is a serious contender for this year’s Thanksgiving feast.

I did make a few changes to Ina’s creation. First, I used less cream and a bit more chicken stalk. Second, I omitted the pancetta because I wanted to keep it meatless. Third, the only bread I had was a loaf of challah. So I toasted that instead of the bread she recommends. And I do think it made the dish especially delicious.

While I was skeptical of the cheese at first, it really gave it a nice subtle nutty flavor. You can leave it out, but perhaps try it with the cheese too. And by the way, when I tested this recipe for just Bryan and me (Sophie refused to eat anything with a leek or mushroom), I cut it in half. We still have more than half the dish left over. Enjoy these new Thanksgiving side dish recipes and let me know if you make any of them. I’ll be moving on to desserts next!

What are you making for Thanksgiving? What’s your classic side dish? Or are you trying a new dish this year?