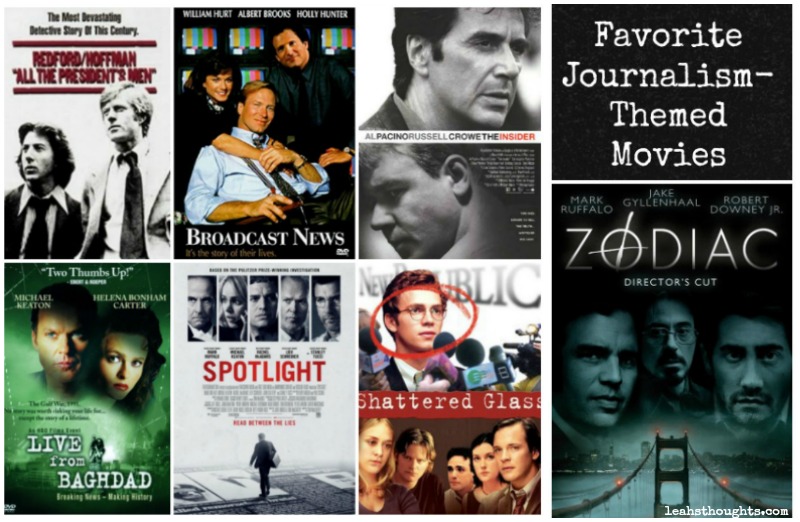 On Journalists, Writing and the Movies That Inspire Me to Tell Stories

I knew I wanted to be a writer and journalist from a young age. In elementary school, I wrote fictional stories. At age 12, I wrote and produced a monthly newsletter that I mailed to pen pals and subscribers across the country (in the days way before the internet). In high school, I chose journalism as my elective course and spent two years as a reporter for the school newspaper. I was a journalism major in college, contributed to the college newspaper, and got my first “real” job working at the San Diego public broadcasting station. After college, I continued to write in various publications, which ultimately led me to call myself a writer today.

For me, the appeal of writing is telling a story and making words come alive on paper (or the screen). When I publish a piece – whether it’s a post on this personal blog, a feature story about a noteworthy person or business or when I wrote parenting pieces for Red Tricycle – my favorite part of the process is when a reader says, “I loved learning about that person.” Or “I didn’t know about that business and now I have to go there.” Or “What you wrote is how I feel.” I don’t write because I want to hear myself talk (or type); I write because I like to share stories that impact people’s lives.

Last month I attended the Power of Narrative Conference in Boston with my close friend and fellow writer, Ann marie. This conference brings together the most inspiring writers. Conference speakers have been Sacha Pfeiffer, a member of the Boston Globe Spotlight team that reported on the Catholic Church controversy in 2002 (and the inspiration for the movie); Emily Steel, the New York Times reporter who uncovered the sexual harassment stories that were the impetuous for the #MeToo movement; humorist Roxanne Gay (“Hunger”); Sonia Nazario (“Enrique’s Journey”); Doris Kearns Goodwin (presidential historian); and so many more.

It’s hard not to feel humbled at this event, surrounded by writers who have told incredible and inspiring stories. Ann marie and I joke that we are probably the only two conference attendees that have not won a Pulitzer Prize. There’s a hint of truth to the statement, which speaks to the caliber of people that attend and speak at this conference. I always leave feeling both inspired and depressed — inspired by the talent, yet depressed because I don’t think I could ever achieve what these individuals have done.

I love writing and feel incredibly fortunate that I can use my words and thoughts to tell stories. Yet at the same time, it can be incredibly frustrating to write, write, write, and feel like you have a great story to tell; and also face constant rejection of pieces submitted. I know this is part of the process and I’m not complaining (well, not all the time). But it’s often hard to know whether you’re making a difference. And when the rejections come, I start thinking maybe what I’m writing isn’t really as worthwhile as I think.

When I feel this way, I come back to the following quote that my friend, Ann marie, posted on Facebook:

Some of the greatest work you do will be known by no one and only experienced by the individual you changed. Be mindful of what matters.

It is a perfect reminder of why I write. And it reminds me of all the writers and journalists I’ve admired, and the stories that impacted me.

Growing up as a child of the 1908s and 90s, I learned about journalists and writers from books and movies. Watching the stories of investigative reporting inspired me (and still inspires me) to want to make a difference in my community and the greater good. Just like so many people credit Atticus Finch and “To Kill a Mockingbird” as the reason they went into law, I watched Woodward and Bernstein (Robert Redford and Dustin Hoffman) investigate the Watergate break-in in “All the President’s Men” and knew I wanted to be a journalist.

So as a salute to the journalists who inspired me to write, here are my favorite journalism-themed movies. Keep in mind these choices are not an inclusive listing of the best journalism movies that have been made (if it were, “Network” and “Absence of Malice” would be on the list). These are simply my picks that I still watch when I need a reminder and some inspiration that words do matter and have the ability to change the world.

All the President’s Men — This is the story that started it all for me. I love watching this movie today, and seeing the reporters go through telephone books and newspaper clips to find information that we can so easily discover on the Internet today. It’s a great reminder of how much more work it was to do investigative reporting before the web.

Broadcast News — While this story is fiction, it’s a fantastic look at television news production and a great portrayal of how the news started shifting to entertaining, ratings and profit. Holly Hunter’s character is so real she’s almost difficult to watch. Also the writing, coupled with Albert Brooks and his lines, are phenomenal.

The Insider — This true story is a look at the “60 Minutes” segment that featured a whistle-blower who spoke out against Big Tobacco. I think this is Russell Crowe’s best work as a tormented insider who is ousted from a lucrative job for being an outsider with different opinions, and really struggles to tell the truth to the world about cigarettes. I also love the behind-the-scenes look at CBS News, “60 Minutes,” and what has become known as one of their most embarrassing story productions. This is a Michael Mann film, so it’s a slow-burn LONG movie; but well worth the time to watch.

Live From Baghdad — Not many people know about this true story about a CNN news crew that was stationed in Baghdad after the invasion of Kuwait, and then became the only American news presence in the area at the very beginning of the Gulf War in 1991. It essentially tells the story of how CNN became the dominant 24-hour news station. Michael Keaton, Helena Bonham Carter, and many other actors you’ll recognize give outstanding performances.

Shattered Glass — In the 1900s, a young reporter named Stephen Glass from The New Republic magazine took the term “fake news” to a whole new level. The movie tells the story of Glass and how it was discovered he fabricated more than half of his articles, including the story about a made-up famous computer hackers at a hacker convention. Forbes Digital broke this story, which was considered an important milestone for online journalism. While I don’t find inspiration in Glass himself, this is a great movie about journalism and ethics with fantastic performances in this HBO production.

Zodiac — Arguably one of my favorite movies of all time, “Zodiac” is the story of the police, a reporter and a cartoonist-turned-writer who investigate the Zodiac serial killer that made headlines in the San Francisco Bay Area from 1969 through the mid-70s. The writing and acting are superb and the movie will transport you back to that time.

Spotlight — This movie follows the Boston Globe’s “Spotlight” team of investigative reporters as they uncover the widespread child sex abuse happening in the Catholic Church in Boston. Although the subject matter is difficult, I find myself fascinated by how the story unfolds and the people who came forward to break the silence. For me, the most powerful part of the movie is the last scene, which shows the Spotlight news room flooded with tip calls from people breaking their own silence after the story is printed. I cry every time I watch it because that ending – and what the writing did for people – is the essence of why we tell stories.

I give an honorable mention to The Post, but I can’t add it to my favorites just yet since it’s still new and I’ve only seen it once. But I do like how it gave a voice to Katherine Graham, the female publisher of The Washington Post, who played a key, yet lesser-known role in the paper’s breaking of Watergate and the Pentagon Papers.

What inspired you to pursue the career path you’re taking? Do you have a go-to list of books or movies that keep you motivated?