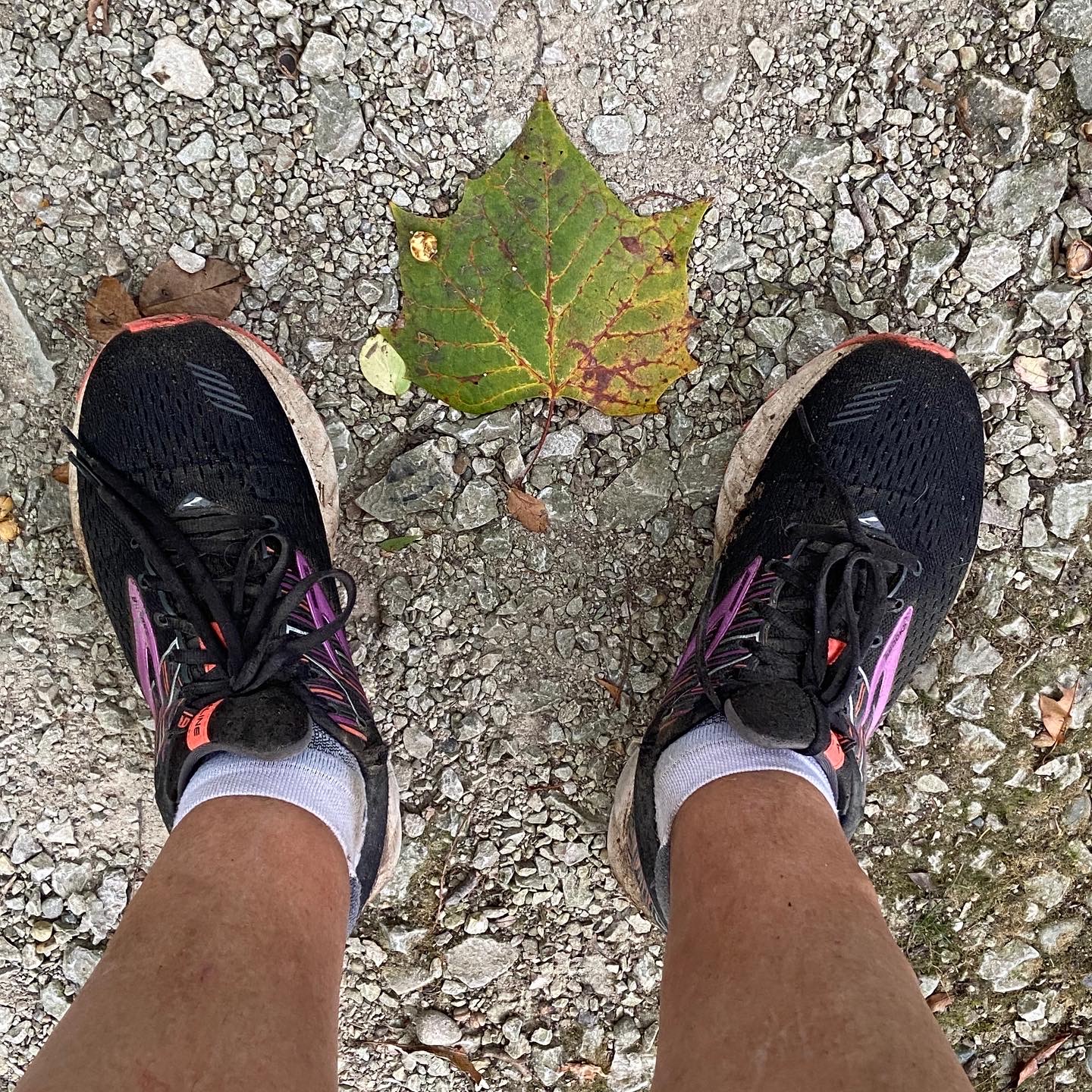 Every evening after work, my dad took himself to the high school track to run. He’d run seven laps and walk the last one, for a total of two miles. My dad is a creature of habit. He has the same daily routine, eats the same meals, watches the same news each and every night. Running two miles at the high school track was dad’s exercise habit for years. I don’t think he particularly loved running, or saw it as the salvation it came to mean for me. Running for dad was like a sense of obligation; it helped him keep control over staying physically fit and quelling any anxiety that may have crept up during the day.

One evening, when I was about 4-years-old, dad took me with him to the high school track, probably in an effort to give my mom some solitary quiet time (which is ironic considering I was a quiet kid). He set me in the sandbox and told me to play there until he finished. I don’t recall what I did in the sandbox, other than watch my dad run around the track.

The way my dad tells this story, he was running briskly around the track and turned back to check on me. But I wasn’t there. “Where is Leah?” he thought, as he started to panic. And then he turned around and saw me.

I was running on the track behind him, and with a smile on my face. There I was: a 4-year-old runner.

I don’t know why I got out of that sandbox to run. Perhaps I was running to catch my dad, or maybe I wanted to be like him. Maybe I wanted to show him that I was strong enough to run along that track with him. Or maybe I just wanted to escape the confinement of the four-sided sandbox. Whatever made me get out and go that day, it’s the first memory I have as a runner.

A svelte appearance was valued highly in my childhood home. And while food was obviously necessary to live, in the eyes of my parents, it was also what caused one to be overweight. And in my family, being overweight was almost as problematic as a drug addiction.

Growing up, my perception of physical activity changed from the day I ran outside the sandbox. I began to see exercise not as something we engaged in for fun and for health, but as punishment or the “cure” for being overweight.

That 4-year-old girl that was so excited to run with her dad on the high school track? That was her last run. Because every time my dad tried to convince me to jog with him, I adamantly refused; mainly because I resented what running symbolized — a way to be thin and accepted. I soon despised running and wanted nothing to do with the exercise that was part of dad’s nightly routine.

When I entered middle school, I could not escape running because of the daily Physical Education requirement. Middle school felt like a prison and the architecture resembled the same with grey cement classroom buildings and wide pillars. There was no color or character. The landscape was non-existent other than a grassy hill where the popular kids – the cool crowd – ate their lunch. I did not eat lunch on that grass.

The running track was not one that had lanes drawn on top of synthetic surface. Mine was a large dirt field. And when the Southern California Santa Ana winds blew their dry heat, dirt cut my skin and caused my face to sweat. One lap was a quarter mile around, but to me, it may as well have been the distance of a marathon.

On Fridays, we were forced to run one mile. Those were the days I would stare at the horizon and long to be anywhere else. Ironically, I wanted to run away. Anything to avoid four deathly long jaunts around that dusty track with no redeeming value to me. Anything for me to escape that dreaded exercise where I would always finish last, feel like a failure, and ashamed at who I was and what I could never do. I hated Fridays and that one mile run.

The idea of myself as not physically able continued into high school. When I was starting my freshman year, I thought it may be fun to play volleyball. My mom dropped me off at the high school gym and I went to day one of team tryouts. Volleyball tryouts were much harder than I expected, especially since I was not used to conditioning, aerobic activity, or any exercise for that matter.

And then it happened: the coach made us run a mile. Like all the miles before, I struggled through that required run. Every other girl was ahead of me and it looked so easy for them. Why was it always so hard for me? I felt like a loser, left practice and decided I would not go back for day two of tryouts.

The years and decades that followed were repeats of the same. I had no physical confidence. I told myself that I just wasn’t a runner. I couldn’t run. It was too difficult. I was too slow. I ran out of breath quickly. My legs were too short and heavy. I believed that losing weight was the secret to being loved; that boys only wanted to date a skinny girl. That food was punishment, not nourishment. And that became my narrative for the next several decades.

For nearly my entire life, I lived in a place where the sunshine was plentiful and outdoor recreation was practically considered its own religion. When people picture Southern California, the images that often come to mind are people running gallantly on the beach, practicing yoga in beautiful studios, and attending expensive Orange Theory exercise classes. But I did none of those things. I led a sedentary life.

Not because I wanted to, but because that’s what I believed myself capable of doing. That image of myself as not a physically capable person — that I’d never be able to run a mile – is one that I carried with me for 40 years.

It was not until I moved away from home that the 4-year-old girl that decided willfully on her own to run around the track, finally started edging her way back into the world.